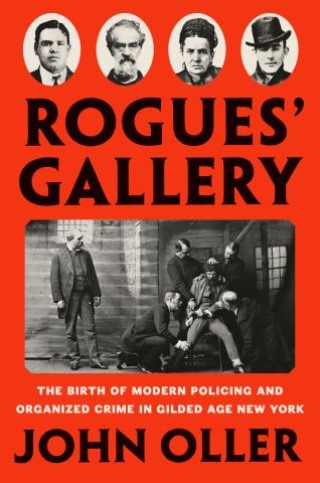 From the beginnings of big-city police work to the rise of the Mafia, Rogues' Gallery is a colorful and captivating history of crime and punishment in the bustling streets of Old New York.

Rogues' Gallery is a sweeping, epic tale of two revolutions, one feeding off the other, that played out on the streets of New York City during an era known as the Gilded Age. For centuries, New York had been a haven of crime. A thief or murderer not caught in the act nearly always got away. But in the early 1870s, an Irish cop by the name of Thomas Byrnes developed new ways to catch criminals. Mug shots and daily lineups helped witnesses point out culprits; the famed rogues' gallery allowed police to track repeat offenders; and the third-degree interrogation method induced recalcitrant crooks to confess. Byrnes worked cases methodically, interviewing witnesses, analyzing crime scenes, and developing theories that helped close the books on previously unsolvable crimes.

Yet as policing became ever more specialized and efficient, crime itself began to change. Robberies became bolder and more elaborate, murders grew more ruthless and macabre, and the street gangs of old transformed into hierarchal criminal enterprises, giving birth to organized crime, including the Mafia. As the decades unfolded, corrupt cops and clever criminals at times blurred together, giving way to waves of police reform at the hands of men like Theodore Roosevelt.

This is a tale of unforgettable characters: Marm Mandelbaum, a matronly German-immigrant woman who paid off cops and politicians to protect her empire of fencing stolen goods; "Clubber" Williams, a sadistic policeman who wielded a twenty-six-inch club against suspects, whether they were guilty or not; Danny Driscoll, the murderous leader of the Irish Whyos Gang and perhaps the first crime boss of New York; Big Tim Sullivan, the corrupt Tammany Hall politician who shielded the Whyos from the law; the suave Italian Paul Kelly and the thuggish Jewish gang leader Monk Eastman, whose rival crews engaged in brawls and gunfights all over the Lower East Side; and Joe Petrosino, a Sicilian-born detective who brilliantly pursued early Mafioso and Black Hand extortionists until a fateful trip back to his native Italy.

Set against the backdrop of New York's Gilded Age, with its extremes of plutocratic wealth, tenement poverty, and rising social unrest, Rogues' Gallery is a fascinating story of the origins of modern policing and organized crime in an eventful era with echoes for our own time.