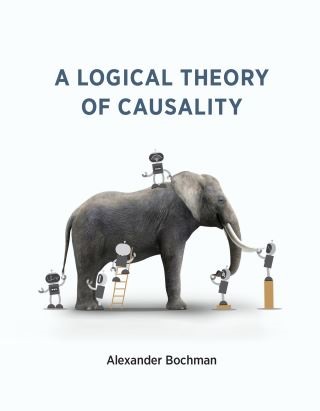 A Logical Theory of Causality

A general formal theory of causal reasoning as a logical study of causal models, reasoning, and inference.

In this book, Alexander Bochman presents a general formal theory of causal reasoning as a logical study of causal models, reasoning, and inference, basing it on a supposition that causal reasoning is not a competitor of logical reasoning but its complement for situations lacking logically sufficient data or knowledge. Bochman also explores the relationship of this theory with the popular structural equation approach to causality proposed by Judea Pearl and explores several applications ranging from artificial intelligence to legal theory, including abduction, counterfactuals, actual and proximate causality, dynamic causal models, and reasoning about action and change in artificial intelligence.
As logical preparation, before introducing causal concepts, Bochman describes an alternative, situation-based semantics for classical logic that provides a better understanding of what can be captured by purely logical means. He then presents another prerequisite, outlining those parts of a general theory of nonmonotonic reasoning that are relevant to his own theory. These two components provide a logical background for the main, two-tier formalism of the causal calculus that serves as the formal basis of his theory. He presents the main causal formalism of the book as a natural generalization of classical logic that allows for causal reasoning. This provides a formal background for subsequent chapters. Finally, Bochman presents a generalization of causal reasoning to dynamic domains.